Is your past a catalyst or a cage?

With our kids, we've read through and listened to the story of Joseph in the Bible many, many times. It is one of our favorites.

If you aren't familiar with the story, Joseph is the son of Jacob's favorite wife, Rachel. He has another son, Benjamin, by the same wife and several other sons by another wife. Joseph is his favorite son. and all his brothers know it. Early in his life, Joseph has dreams about his older half brothers serving him, he tells them, and to make a long story short, they debate whether to kill him but decide to sell him as a slave and tell their father that he is dead. 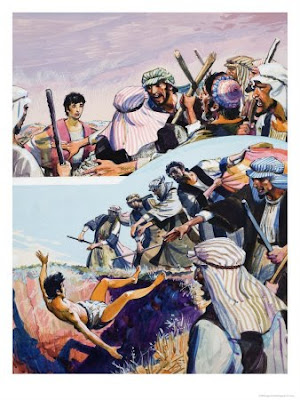 Joseph ends up a slave in Egypt, is later lied about and lives in prison for many years. Basically, he spends fifteen years of his life in a miserable existence because of what other people have done to him. But Joseph's heart isn't miserable. He trusts God, honors Him.
In the end Joseph, an Israelite, becomes second in power only to Pharaoh. Really! From slave to hero! It is a brilliant story, so listen to it (Genesis 37-50). He even interprets dreams and saves Egypt from a famine.
Now lets skip back to those brothers who sold him off. We don't know much about their lives back home with their father Jacob and half brother Benjamin but here they come to Egypt, looking for food for their families because the famine has hit them hard too. 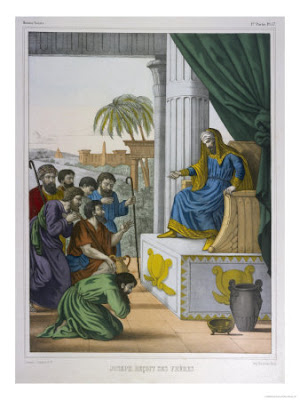 When they appear before the man in command of distributing the grain and food, he accuses them of being spies. Their response? They go back all those years ago to the moment they sold their brother as a slave and blame their life troubles on that one event. God must be punishing them for what they did.
To shorten the story still, Joseph is the man distributing the grain, he forgives his brothers, is reconciled to them and his father and they live together happily in Egypt. He even tells them that all they meant for evil, God used for good! This is pivotal. This is the heart attitude that preserved Joseph while he was being accused of adultery, chained in prison, forgotten, living alone without family in Egypt.
End of story? No. Of course not. In time, the boys' father Jacob dies. Once again Joseph's brothers turn back to that moment in time when they sold Joseph, worrying that he will now take his revenge on them. It doesn't matter that Joseph has taken care of them and their families, loved them, provided homes and land for them, forgiven them. They are stuck in time. Stuck in their past on a mistake they made.
I had never noticed this contrast in the story of Joseph until a few days ago. I've been noticing how most of us still live one of these two ways. We have options. We can live our lives out still shaking a finger at our childhood, blaming an alcoholic parent, unloving mother, unaffectionate father, ungodly spouse. We can take a load of blame on ourselves and live out in fear that somewhere around the corner is a consequence waiting to greet us for a mistake we made, an abortion we had, a marriage we left. Joseph's brothers took those roads. They were victims, the sons of a wife Jacob did not love, and while Joseph was the favored son - they played second fiddle.
Joseph could have played the cards dealt him in the same manner, becoming hateful toward the man that wrongly put him in jail, bitter toward the God who had seemingly forgotten him, revengeful towards the brothers who came asking for food. Maybe he wouldn't have even gone to those extremes. If he had marriage problems, he could have pointed back to his childhood, blaming his mother's death, living in a single parent home...
Someone once said to me, "oh, it's alright, we all carry baggage from our pasts." Really? If that is the logic you follow, which crowd do you think that puts you with? I've been thinking on this story all day, while folding laundry, doing lessons with kiddos and separating chicken into freezer bags. Won't you think a while on it with me?
Posted by Me at Tuesday, February 09, 2010

Wow! I love this post. I just started following your blog and am on my own seeking mission to find out where I belong. This post spoke to my soul..thank you...

Very timely for me. Trying to release bitterness about other family members.

Truly God is speaking through you in this moment because I really needed to hear that story. Thank you for the gentle lesson. I love your blog for many reasons, but this is just one of them. You are a great person! Thank you for sharing your knowledge.

Dear Hannah,
Yes, I have been thinking on it, and agree, yet let's consider the person who talked about carrying baggage". Baggage indeed our history is, if it is a weight and an excuse.
If we toss our history aside, and forget it, are we tossing away lessons in humility and patience and sympathy that we have been taught? It is how we use and perceive our experiences. Joseph, it is clear, learned wisdom and forgivenes through his history of suffering.
In my experience, it is often those who have yet to suffer who are the most cruel to their fellows.
Just a thought...
Thank you for a this concept to chew on, and may you be warm and sheltered in the snowstorm,
Natalie in blustery KY

Thank you, Tanya for stopping by and sharing your heart. :)

Jenn, good for you in knowing which direction to head, in what to pursue...

Thanks, Breedale, but I'm sure it wasn't any fancy wisdom on my own that came up with what I wrote.

Natalie, when I hear or see "baggage" being used as an excuse, I think of something heavy, cumbersome, weighing down, slowing down, holding back... Baggage (or burdens) even scripturally, are never spoken of in a positive light unless its where we are urged to lay ours down and take up Christ's.

I was making the point about how Joseph used his history as a catalyst (as opposed to a self-imposed cage or burden that would limit his usefulness to God), which I think is what you are trying to say also. :)

No doubt Joseph's history was used by God to shape him into a man useful for God's work.

And, Natalie, somehow we've been spared all the dumping upon of snow here in the northeast! We are so thankful! :)

What in incredible look into this often overlooked story. I love the application you discovered at the brothers looking in the past as a way to fear the future. And to think Joseph said that about God turning trials into good. How true that is. I am a new follower and look forward to learning more...

So glad the big storm isn't affecting you all. We have some ice and slush and snow on top of that. It is pretty and I hope to take the tads out in it at lunchtime, although it's not exactly sledding quality.

We just finished reading Genesis a week ago! We follow a daily planner that takes us through the OT once and the NT twice...we love it

Very nice thoughts. It is easy to get trapped by the bad things that have happened. It is much harder to see how they have been used by God to get us where we are today.

Thank you for the link to The Bible Podcast. Glad to hear that you and your family are listening to God's word together.