Thinking about this today.... 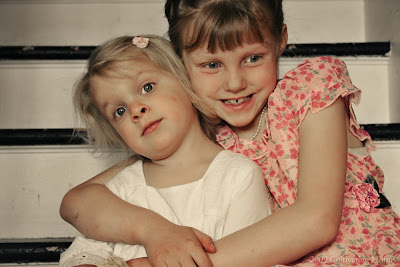 "Some Christians believe that children are morally innocent and that it is not right to treat them as though they have sinned when they show immature behavior. But there is a theological problem with distinguishing between immaturity and rebellion. This means that sinful actions done by one class of humans (children) are no longer sin and makes a mockery of the sinful state of humanity and of God's grace in salvation - it means our children don't need Jesus; all they need is humanism (behavior modification) until they reach some age of moral culpability."
Nate Wilson
Posted by Me at Wednesday, April 29, 2009

I don't know, Hannah. I don't think I agree with this author. (But thanks for giving me something to think about!)

Babies come out of the womb as "selfish" creatures--but they depend on us for survival. I don't think that tiny infants can sin.

And if a one-minute-old baby can't sin, what about a 1-day-old infant?

I'm just wondering what you think. What do you believe happens to the souls of babies who die before they are old enough to formally accept Jesus as their Savior?

I posted this because it made me stop and think too. I don't know if I agree with it all but certain aspects of it were thought-worthy.

I don't believe that a baby's cries for food or comfort or love are sin in any way. Definitely not.

I know that children are not morally innocent because the Bible teaches us that children are born in sin. Can an infant sin? I have no idea. I think that there is sin nature there present at birth, carried on down the line of humanity. If this weren't so, then Jesus would not have needed to die for all mankind, right? Just the adults.

If sin were just a taught thing or behavioral than, theoretically, one could isolate a human from all bad influences and have them turn out perfect, as a god, not needing a savior, right?

I do agree with his point about humanism and behavior modification. Isn't it so sad to see a parent missing the heart issue in a child's behavior and passing it off as childish behavior or allowing a certain behavior in their child because of their age (for example, screaming at the parent, throwing a tantrum when they don't get their way).

We see a lot of humanism creeping into certain parenting styles among Christians under different guises that sound so nice.

As for what happens to babies that pass away before reaching an age of accountability, I believe they are covered under the faith of their parent(s).

Thanks for prompting a good discussion.

As for what happens to babies that pass away before reaching an age of accountability, I believe they are covered under the faith of their parent(s)Does this mean that babies whose parents are not believers are out of luck?

Scholastica, I really hope not, but I honestly don't know. I'm not a theologian just a simple believer who studies the words of a Saviour I love. I came across this article, and thought it was well laid out.
http://www.forgottengrief.com/Godbaby.html
Hope this helps,
Blessings,
Hannah

Thanks for responding, Hannah. I always enjoy your discussions!

I believe that infants are in a state of innocence. At toddler age is when children start disobeying, because they understand more. An infant does not understand a command from a parent, such as "Stop crying." We don't do things like that because it is utterly ridiculous. Adam and Eve were not perfect, they were innocent.
Courtney

I do agree with the post in saying that everyone needs a Savior even children. Children don't just one day turn into sinners in need of a savior. I do think humanism is a very bad thing as well. I didn't listen to all that he said I just read the part that you posted. Everyone is born in sin because of what Adam and Eve did in the garden. "Wherefore, as by one man sin entered into the world, and death by sin; and so death passed upon all men, for that all have sinned: (For until the law sin was in teh world: but sin is not imputed when there is no law. Nevertheless death reigned from Adam to Moses, even over them that had not sinned after the similitude of Adam's transgression, who is the figure of him that was to come. But not as teh offence, so also is the free gift. For if through the offence of one many be dead, much more the grace of God, and the gift by grace, which is by one man, Jesus Christ hath abounded unto many. Romans Chapter 5 vs12-15 King James Bible
Because of Adam's sin we are all condemed by sin.
"Romans 3-10 As it is written, THERE IS NON RIGHTEOUS, NO, NOT ONE.

Infants and babes don't sin no, they are born in sin.
When and infant or a child that hasn't reached the age of accountability dies they are "safe" and the bible teaches heaven is there home. Children have to come to the point where they understand sin and what it is and why they need a saviour. If a child doesn't know right from wrong then how would they know they needed a saviour? We don't just need a saviour because we just do! If you were never taught about Jesus how would you know you needed him? The bible teaches of all these things. We just have to be willing to read and study and pray over the word.
2 Timothy 2 vs 15 Study to shew thyself approved unto God, a workman that needeth not to be ashamed, rightly dividing the word of truth.
Everyone needs a Saviour even children.

This was a very good thought provoking post..makes you dig in the word..don't take someone's word for what the bible says read the KJ bible, study it, fast and pray God will reveal himself to you, he promised that in his word.
Joy

Thanks for the scripture, Joy. I love seeing things laid out from a Biblical basis as that is our basis for absolute truth.
Hannah

Emma wrote and asked: "what exactly do you mean by humanisim starting to creep into the way Christians discipline their children? I am very strict with my sons, however, I believe very strongly in grace-based parenting."

Emma, I don't think it's safe to lump all grace based parenting together, just as it isn't safe to lump all parents that spank together. There are a lot of variables, I've seen both done so, so horribly and both done very well.
I chose not to link to the website you posted because, reading through it, I noticed a lot of gaps left out by the author regarding the exegesis of the scriptures.

Really, the best thing any parent can do if they want to parent their children in a Christ honoring way is read the scriptures for yourself and research with the Bible and a concordance laid before you and prayer for God to guide you.

The golden rule of humanism is "don't do to others what you wouldn't want done to you". Sounds nice but I am thankful God doesn't buy that theory and has, in my life, done the work He's needed to do to bring forth good fruit, good character, draw me closer to Him, etc. These lessons haven't always been sweet or painless but they have been so valuable.

I've seen parents let their children act in ridiculous ways under the excuse of "they are just expressing themselves and that is their right" and the word discipline is scoffed at and "training" used in parenting is even worse under the explanation that our children aren't broken and don't need fixing. I love our children enough to recognize that they might not be born broken but they do need some manners and common decency and respect for others to honor God with their lives. So I use words like "train" and "teach"
because God has trained and taught me as a mother and as a wife and I see the beauty of those things.
Hope this explains my view,
Blessings,
Hannah

I can't remember the verse but it says that even when Jesus was still eating pablum he knew right from wrong. He was in complete diety AND complete humanity at the time and would not hold us to a standard He himself did not keep. Our children are born sinners through the seed of man but they also have the capacity to know God and distingish between right from wrong very early on.