That wonderful morning Bear and I braved the howling winds on our walk, Sean spent an hour or so snowblowing the driveway. We are so glad we invested in a used snowblower this year, having paid for the driveway to be plowed in previous years at $20 a pop. With the amount of snow that's been dumped in upstate New York, it paid for itself in one month. We have a loooong driveway. 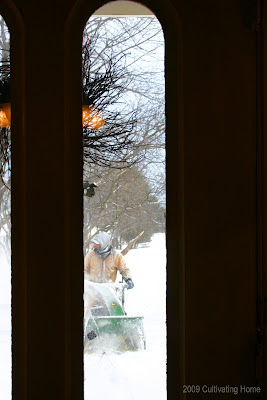 I love being able to stand over the cook stove, flipping eggs on the griddle and watch what is happening outside, snow blowing, sun rising over the hills, kiddos running about doing chicken and duck chores then sneaking in a quick sled down the driveway before breakfast, coming in to hover by the wood stove, rosy cheeked. 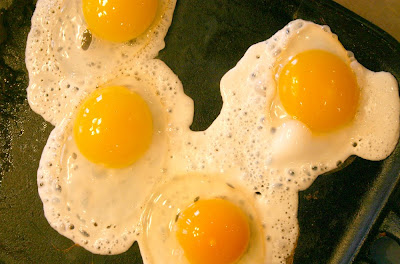 After an almost two month hiatus, our birds have begun laying again. I think they took Sean's threats to send them into the stew pot to heart. Store eggs just don't cut it after tasting these golden mounded beauties. With this weather, the race is always on to find the eggs before they freeze and crack.
We also began to notice Bear becoming a little rounder this winter and found she had become adept at opening locked chicken hutch doors... 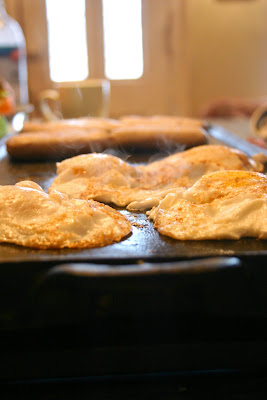 On a side note, I've made a healthier variation of this quick bread recipe. I'll share it soon. It is a delicious combination of wheat, rye and white flours. 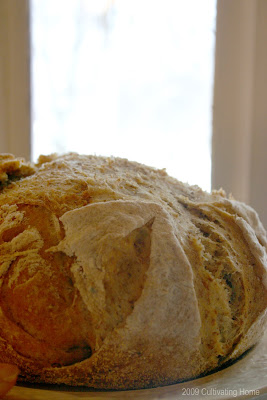 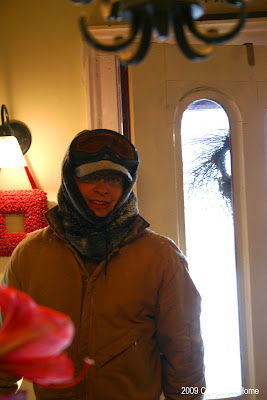 A few of the small ones of the household are still recovering from various colds and viruses but we're good. Sleep works miracles.
Sean took a few of the boys ice skating this morning so I think I'll go tackle another few loads of laundry while the house is fairly dull!
Have a beautiful day,
Hannah
Posted by Me at Friday, January 30, 2009

Those eggs look wonderful! I wish we had chickens. Maybe some day!

I'm glad to hear you are all okay and the babies are on the mend.

what a wonderful post, it has insprired me to get off my butt and to work!

So glad the kids are all on the mend. Sprout (9mths) is bringing in 3 teeth at once, I'm sure you can imagine!

THE SNOW!! when will it ever stop? You're a bit further north than I am and it snows in the morning and snows at night. It feels like eternity until spring arrives. Have a wonderful day..
Barbara

What a wonderful morning!
Do you put a light on in your chicken coop? with the days being so short, the birds will roost earlier ...but with a light...they are awake more and lay more.

Glad everyone is on the mend. Thinking and praying for you. I can't wait till you post the recipe for the bread. It looks so good. If sourdough starter is used, could you let us know how you got that started also? Thanks for the great pictures.

Lynn, I think a few little cluckery hens would be just lovely in your yard. Have you looked into it?
Ways of Zion, I feel for you with the teething. Chase is working o umber 7 and 8 in the teeth departmennt, which is really early for our kids. Most of them popped the first tooth around their first birthday.
Barbara, are you enjoyig warmth today? It's 47 out here! Out for a walk we go!
Kim, we put in a light for the first time this year. The ducks had their own winterized duck house but once they saw the light in the chicken coop, they decided to move in! It is going to be one messy poopy mess in there come spring. We keep throwing in fresh hay to compensate.
Karen, I'll try to get to that recipe soon. It's not made with sourdough, so its really easy.

My first bread making experience with this artisan bread was so easy and delicious! Thanks for posting about it! My family gobbled it up and are hungry for more.