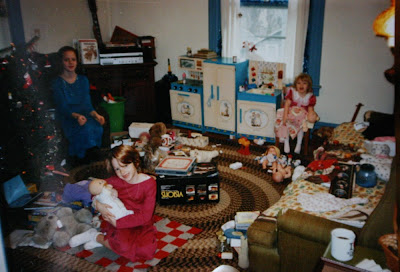 (me, front and center circa 1986)
Even before I wrote this post, the future heading of our family and the business had been regularly brought before the Lord, as we sensed a change of seasons in both areas. One thing I highly respect about my husband is his prayer life. He repeatedly kept on praying that God would give him wisdom so that he wouldn't be like our chickens.

This spring we tidied up the chicken coop and decided to move the fencing surrounding it so that the chickens would have fresh grass and some more shading during the hot summer. In the process of moving the fence, we had to move the gate that the chickens go through every night before settling into their coop to roost. It was moved just a few feet.

That first night when we went to close in the poultry for the night we noticed the hens sitting outside the fence where the old gate used to be, even though the new gate was just a few feet away. So ensued a lot of chasing and muttering and chasing as we tried to usher the chickens in through the new gate. This went on night after night after night and for at least a month there were one or two obstinate hens that headed at night to where the old gate used to be. They would run headlong into the fencing, fall back, and charge forward once more, fall back again... all the while the gate being wide open a few feet away.

"Lord," Sean would pray, "Help us not to be like those chickens, pursuing the same thing over and over, hitting that same spot, and missing it. Lord, we don't want to miss what you have for us." (Yes, I appreciate a man who can pull spiritual analogies from homesteading!)

And this, this really became our prayer during a season of uncertainty as we lost business clients and questions arose about Germany. "God, help us not to be like those chickens." In all, I felt like God was shaking things and sifting things and asking "what" our priorities in life were and with what purpose we were living life.

Sean and I and the little ones have so much to be thankful for, food on the table, health insurance for the kiddos, a business that provides for our family even though it is directly tied to the housing market, and the selling of our old kitchen cupboards just this week which allows us to finish up sheetrock in two unfinished rooms.

More than that, the two of us are crunching around and mulling around a specific plan which would allow us to fulfill our desire to work with orphans and families with a few chickens thrown in to boot.

So, in the midst of a crazy economy, and higher taxes (any fellow New Yorkers give an amen!) feel free to borrow our chicken prayer, because I know, that like us, God has specific plans and purposes for your life too.
Posted by Me at Friday, January 02, 2009

Great post... great prayer. Thank you for sharing!
Beth in NC (we have some nasty high taxes down here, too :-)

oh man, great prayer. that analogy is so much like those of christ (parable, if you will). he was always pulling from the natural. thanks for the post.

I needed to hear just that today. Thank you so much for sharing.

What a great analogy and prayer!

The chicken prayer huh? lol Sometimes the Lord uses unusual ways to communicate us. ;)
I pray you all have a blessed and prosperous 2009!
Patricia

That's a great prayer. And girl I sympathize with you about the high taxes here in NY.

Wonderful post... Since being stuck in the house for over a week it is nice to have a good story to read. (Whole family down with a really bad virus. Hopefully it will not head your way.)
You want to go on about high taxes, come on down to New Jersey and we can share a pot of tea, that if the Gov has not taxed it!
LOL
Sue