"Stay at home, my heart, and rest. Home keeping hearts are happiest." Longfellow

By 6:20 the wee ones are awake and I mentally punch myself for not plugging in in their alarm clock, as requests to "get up now" echo from one bed to another and circle around the room again. We've found an alarm clock to be very useful at letting the kids know when they can get up
.
Our dog, Bear, had a rough night and Sean a worse one. Yesterday evening Bear got into some groceries on the dining room table and devoured a complete bag of semisweet Ghiardelli chocolate chips. The entire bag! Intended for one pregnant woman's chocolate chip cookies!
Sean got home late from his meeting, sat on the edge of our bed and said, "Ughhhhh!!!!" holding up his bare foot from which was dripping a sort of slimy substance. I burst into disgusted laughter. It was plain nasty. Dripping slime of Dog puke.

When Sean got up at 2:30am to throw a log on the wood stove he stepped in pile number two of chocolate dog puke. Piles three, four, and five were on the next stairs he walked down. He chased Bear outdoors and when she came in again she puked him another pile.
Sean came back to bed and said he would not like any chocolate any time soon. I tried not to shake the bed with my quiet laughing.
I should have prefaced this by the fact that puking makes me laugh. Not my own, just anyone else's. I'm sorry. It is a despicable character trait, I know. Especially for a former nurse. I have no good reasons for my unfitting behavior. I try to think of all kinds of solemn things while family members are puking but nothing works. SO anyway, puke makes me laugh.
There were more chocolately piles this morning around the house. And the puking continued. Poor Bear. Not wanting to be bending over cleaning puke all day, we've settled her out of doors today and she seems happy there.

All that before 6:20 am.
I pulled a few of these bagels out of the freezer for breakfast with eggs from our chickens and chocolate milk.  Andrew followed Sean out to do chickens while Annaliese cleared the table and even put a new tablecloth on without being asked! I'm sure I'm not the only Mom who loves it when their kids do nice things on their own motivation. She also said her entire memory verse from heart this morning, which, according to a family rule, earned her a dollar. It was Psalm 139:1-6.  Andrew and Aiden have just about got it down. I am going to ask Sean how to record Aiden saying it and see if I can put it on this blog. I have no idea how to do such computer-ish things! His pronunciation is horribly adorable. I love it.
The two littlest ones colored in coloring books, which are a novelty as they usually prefer plain paper. 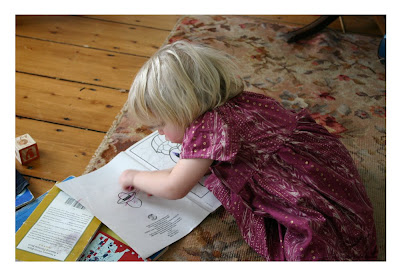 The older two did their lessons.  Andrew's three words from the letter "H" were Hannah, horse, and hot. 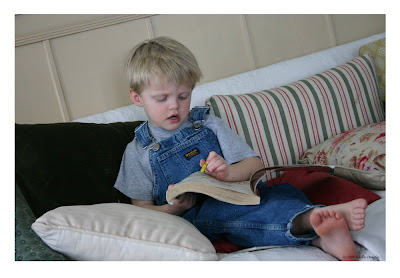 Two loads of laundry done and a third one in the washer. 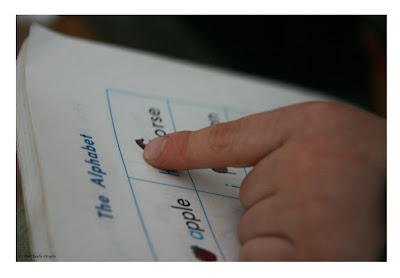 Dishwasher emptied.  Annaliese worked on finishing her Gutenberg story and the rest of us headed upstairs to clean and play in the library. I hadn't hooked up our record player since we moved here a year ago and did that, intending to put on some of the records from when I was a kid for the small ones doing puzzles nearby. All hooked up and found out the stylus on the record arm is missing. Ugh. I'll see if Sean can improvise something. We made do with more tapes. Scrubbed down the master bath and tried to tidy the bedroom which has become a gathering for sewing supplies this winter.
Annaliese gave me a run through of what Gutenberg was all about. I told her that before him, any books had to be done by hand, that they didn't even have computers and printers or typewriters back then. "Mom, what is a typewriter?" Um.... dating myself with outdated electronics again.
I worked on Aiden's Easter pants for a few minutes and the kids notified me that a truck was backing into our driveway. 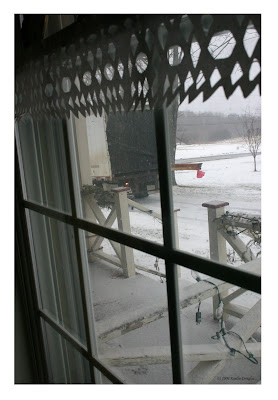 Wood beams for the portion of our roof that is flat. A long, leaky story which Sean is remedying. It was snowing as I ran outside in my clogs to show him where to put the wood in the garage and signed for it. It was a fascinating event for two small ones. 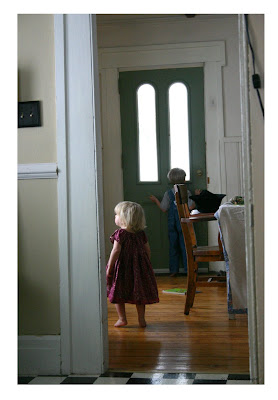 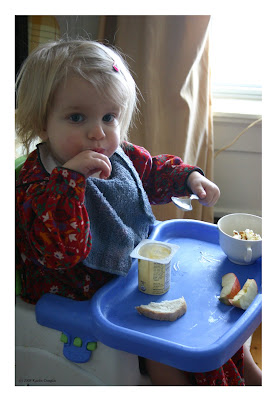 Annaliese and Andrew played outside with Bear, collecting eggs and mail on their way in. Six eggs this morning.
I put away the kids clothing. The boys share a dresser and the girls share a dresser. Two drawers each for the boys and a drawer and a half each for the girls. The kids have a closet in their room that they share. It sounds cramped but it really makes me keep track of their clothing better, tossing worn or outgrown clothing quickly. In their closet, they each have a separate area with different colored hangers for each child. 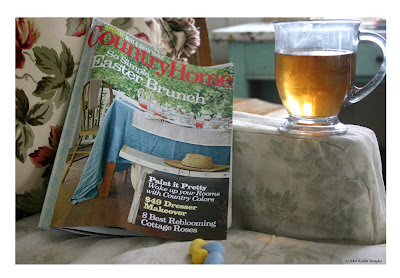 Nap time and quiet time for Mama with a new magazine, cup of decaf iced tea and a few chocolate eggs. During quiet time, Andrew carefully copied all of his playmobil weapons onto a sheet of paper "in case I lose any so I'll know which ones." 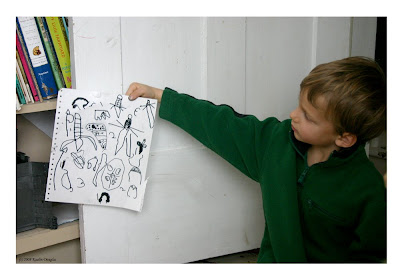 On the other side he drew a pirate and a redcoat (the bad guys) and turned the paper into a paper airplane.
Sean got home and gave Aiden a haircut. 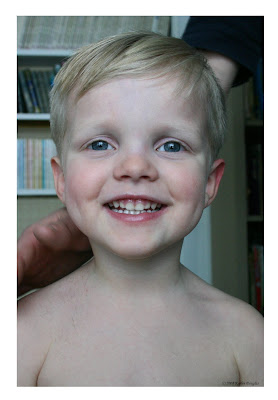 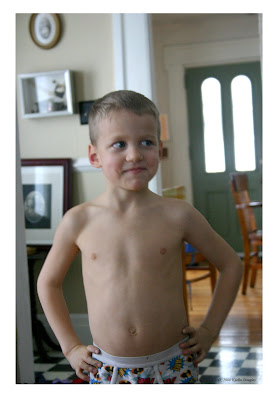 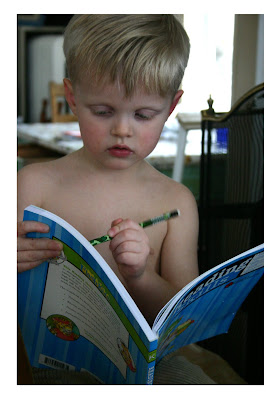 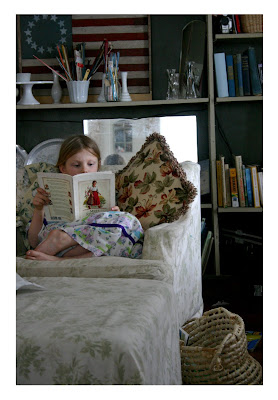 While I was primping, I heard the kids getting excited downstairs. 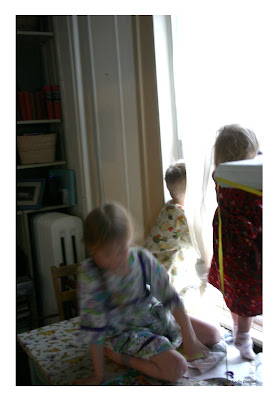 Annaliese ran up to our bathroom to tell me that there were lots of robins outside with orange brists. 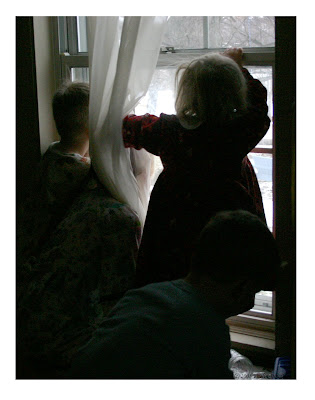 Yes, "brists", not breasts. The kids sat on the kid table and watched them for a good half hour. Ahh... spring shall come.
Tonight I picked up our wonderful babysitter whom we love dearly. I love date night. The drive to her home is beautiful. The deer were out everywhere. 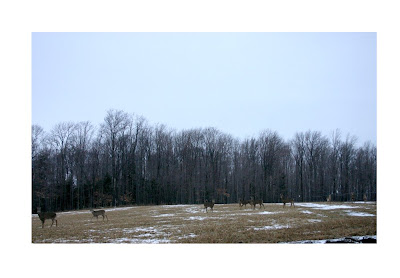 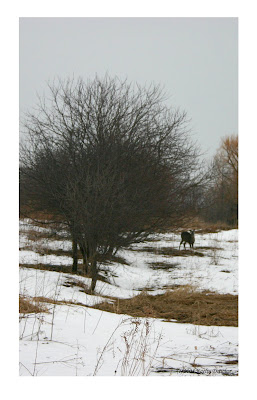 These cute little falls and the pond they flow from are on the way. 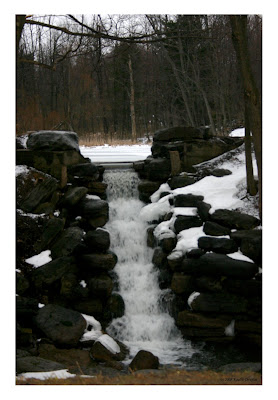 Sean and I went out for a quick dinner and then to Sears to check clearance appliances for the new kitchen and finally to the bookstore. 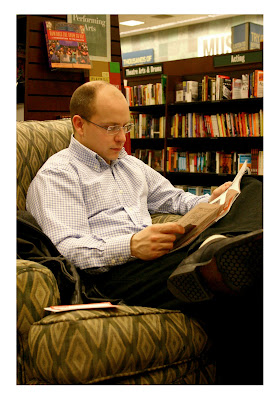 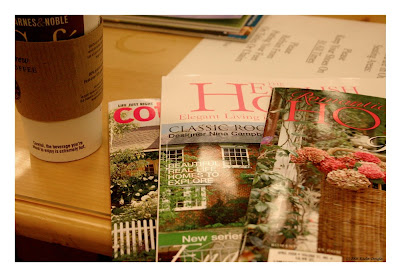 A handsome man, a caramel macchiato and flowery decorating magazines. What a nice night!
Hannah
Posted by Me at Tuesday, March 04, 2008

What a day! I note that YOU do like chocolate, even after the dog episode.

Hannah, I had to call my Joseph to the screen to see the weapons drawing. He used to do the same thing. He admitted it was exactly what he'd have done.

I found your cultivating home store blog and would like to buy the 1960's raglan dress McCall's pattern if you still have it, and the Vogue pattern if it's pre-1964!

Hi Kirsten,
We had also heard that chocolate can kill a dog. Luckily Bear hasn't read that and was content to puke it all up!
Lynn, It would take something major for me not to like chocolate. Love it.
I am very Mary, I'll check and see if those patterns are still around here and let you know!
Blessings,
Hannah

How fun visiting your blog and seeing your very busy household filled with happy and sweet cherub children! It reminds me of a recent visit I had with my son's household, four very busy little ones, though three down with chicken pox. Never a dull moment, happy to give a reprieve to my son's wife for a time. Enjoy these days, they soon fly by in the blink of an eye. :-)

Thanks, Renee, for stopping by! It grieves me every time I stop and think about how quickly my children are growing! I don't like to think about it!
Have a lovely spring day!
Hannah