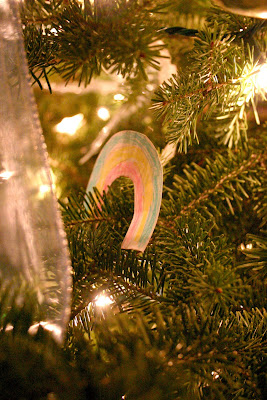 (our ornament to go along with the story)


Noah had a good life. He loved the Lord, and the Lord had blessed him with a beautiful and good wife. Three sons filled their happy home with even more joy and contentment. But even though Noah and his family loved God, the people in the world around them did not. They broke all of God’s laws and did everything evil, living their lives without love or humility or forgiveness. They enjoyed being bad. 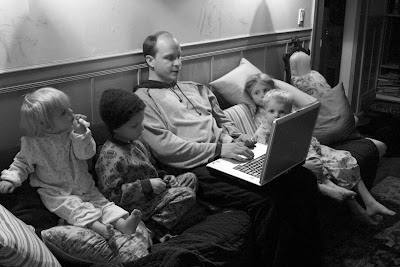 (listening to the story)
Noah’s wife handed him a sack one morning containing some homemade bread and a flask of fresh water to soothe his throat. His sons were growing tall and soon would join him in his work.
As Noah walked, he talked to God. Noah was a tall man with broad shoulders and strong muscles from working hard. He was barefooted, the soles of his feet thick and calloused from walking and working. A thick brown beard fell from his chin and he stroked it often as he talked with God. In the silence between his words, Noah heard God speak.
God told Noah that He was very sad with the world and wished he had never created it. God told Noah that He was going to destroy all of the people on earth and all of the creation He had so carefully and lovingly made.
“Is it to be?” Noah solemnly asked God, “that my wife and my sons shall die also?”
“Noah, I want you to build a great big boat.” God replied. “Build it out of gopher wood and tar the seams of the wood so it is tight and dry inside. This will be for you and your family and the animals you will gather into the ark.”
Noah wondered why he needed a boat so far from the sea, but he did not question God. Everything God told Noah to do, down to making a window in the ark, Noah did.

The sun was blazing hot as Noah worked. His sons worked beside him, for they had grown over the years since Noah began the great boat. Noah’s son, Shem, Ham and Japheth had their own wives now, women who loved and feared the Lord as Noah and his family did.
The crowds of people watching Noah work had dwindled in the heat of the noon sun. People often came to mock Noah. They called him names and made fun of him. Sometimes they even threw stones at him and called him a crazy old man. “Where will you sail this great monster of a ship?” they asked and yelled. “How will you push it to the sea?” On and on the people joked.
While Noah and his sons worked, Noah’s wife and his son’s wives worked hard too. Noah’s wife had long gray hair tied back in a strip of woven cloth. Her face was wrinkled but her eyes still shone and she was still strong. Inside her, a deep love for her husband and her God burned on. She trusted Noah and she trusted her God.
The women gathered nuts every fall, drying and preserving them in baskets that they had woven. They ground grains into flour and corn into meal, packing them carefully in the section of the great boat reserve for food. Herbs and dried fruits hung from the massive rafters, line upon line and row upon row of colorful dried citrus, cilantro, cinnamon, and apples.
Finally, the work on the boat was finished and Noah laid the last wooden peg into place. His aged hands were thick and rough after the years of hard work, as were his sons.
“The animals?” Noah’s wife whispered wearily, as Noah wrapped his tired arms around her. His shoulders sank and he whispered back, “God knows.”
Noah and his family rested that night in the ark. They dared not leave it lest thieves come and steal the food or enemies come and burn it to rubble.
Noah awoke the next morning to something wet wiggling through his beard, and then a snort. His eyes opened and he saw that the wet something was a giraffe’s nose, searching through his beard. As he pushed aside the great giraffe’s head, Noah saw another giraffe standing beside the first, eating leaves from a tall tree.
“Did you pack leaves?” he calmly asked his wife, who was rubbing the sleep from her brown eyes. She smiled and said, “of course.”
The two giraffes were the first animals God sent. That same day, the animals came in a long, long line. There was no fighting, as animals normally do. The lion and lioness left the buck and doe ahead of them alone as they all waited their turn into the great boat. 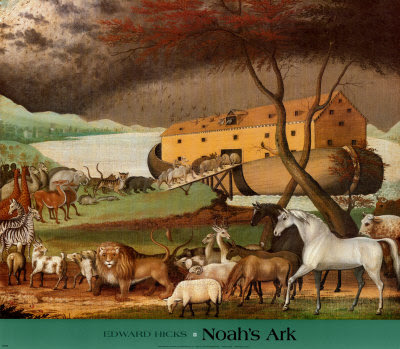 Noah’s wife’s eyes were wet as she stood in awe. Past her brushed a bear with paws as big as her head. It and its mate were calm and sedate as her son’s led them to their new quarters aboard the boat. Two alligators belly crawled past Noah and into a crate reserved just for them. There were places for pigs and cattle and rabbits and mice. Horses and zebras, snails and bees, every living creature settled into place and soon the boat was abuzz with animal sounds and thick with animal smells. Shem, Ham and Japheth were as excited as small boys again at seeing all these beautiful creatures up so close. A hawk landed on Shem’s shoulder and looked on as monkeys hung from the rafters, snakes slithered around beams and turtles hung back their heads into the quiet of their shells. Shem’s wife stroked a kitten in her arms as a great leopard sauntered by with its head held high.
Japheth stuck his head out of the boat and saw that the long line was finally coming to an end. An ant-eater crawled over his foot with its mate behind it. There was still a crowd of people outside, calling and mocking still.
“Have you become a livestock farmer now that your foolish ship is finished? Are you so lonely for friends and fun that you take up with the animals?” On and on their jeers and yelling went. So intent on having fun were they, that they did not notice the dark black clouds rolling in from the horizon.
Noah and his family stood, watching the clouds. A great gust of wind came with the clouds and with his powerful hand that had shaped the mountains and formed the planets, God closed the door of the ark. Clouds of every shape gathered above the earth and all the deep wells of the earth broke open. Water gushed everywhere, from the skies above and from the earth below. After forty days and forty nights of continual rain, the earth was flooded completely.
With a great groan, the ark had left the earth and begun to float. Shem could not see any more mountain tops or tree tops as he flung the animal dung out of the ark’s window. The ark kept dry inside and Noah and his family often sat by the window where fresh air and little breezes blew in. They fed the hippopotamus’ and the elephants and all the other creatures. They swept and shoveled and laid clean hay beneath their great bellies.
Noah waited on God and God had not forgotten Noah. In the seventh month, just as Noah’s wife had stepped off a ladder leaning to the food room, the ark and its contents skidded to a halt with a loud scraping sound. Everyone ran to the window excitedly.
“We must be on the highest mountain!” Noah announced. But still, as they looked out, they saw nothing but great depths of blue green water as far as their eyes allowed them to see.
“Well, there’s plenty of food still,” Noah’s wife said and turned back to her work.
In time, Noah again opened the window of the boat and sent out a rave. It flew to and from, finding no place to land. A week later Noah sent out a pure white dove, one that allowed him to pet and stroke it. It too came back, settling onto his shoulder. A third time, Noah sent out the dove and this time he joyfully pronounced over dinner, “Look and see what she brought back to me!”
His wife and family looked as he pulled a fresh olive branch from his cloak. Could it be, after all this time, the waters were finally drying up? Noah sent out the dove again, to see what she would bring back but this time she did not return to him.
“Noah,” God spoke from the parting clouds, “It is time to leave the ark.”
Noah and his family were followed by a long line of animals as they left the ark and stood in the sunshine. The earth was fresh and new. The alligators ran for the water and the lions ran into the forests. Birds flew freely at last and the kangaroos hopped and leaped happily. 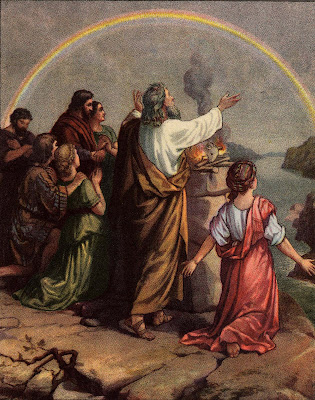 With joy and thankfulness in their hearts, Noah and his family offered prayers and sacrifices to God. God’s heart was very pleased and he made promises to never destroy the earth in a flood again. He placed a very special sign in the sky above Noah and his family and all of the animals. Today, a rainbow is a reminder to us of the special promises and blessings God gave Noah and his family.
Posted by Me at Sunday, December 02, 2007