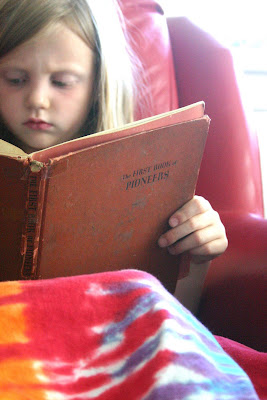 Pause for a moment and picture this: a young girl plays quietly with her Barbie dolls throughout the morning. When she tires of them she opens the fridge door and grabs something to eat, turning on the television to watch her favorite Nickelodeon cartoon. She's about six years old.
Sound like a boring summer vacation?
According to an article I read in a magazine at Barnes and Noble last night, this is unschooling. I nearly choked on my lemon water and fell off my seat. Instantly embarrassed.
I've often described myself an as unschooler but now I see I'll have to tread carefully from now on.
Here's my definition of unschooling:
Unschooling means we do not set up a classroom in the home. Classrooms are for schools, in my opinion, though I have seen home school Moms set up desks and chairs and flags and a chalkboard and have their kids raise their hands before talking.
Unschooling means that our home learning is child led. If Andrew were to show a sudden interest in telling time, we'd switch gears in math to cover that subject. That's how King Arthur keeps interrupting my loose lesson plans on ancient Rome. So I bow to King Arthur and Excalibur. Rome wasn't built in a day and it can wait another.
Unschooling means that learning in our home is made as enjoyable as possible. We bake and mix and stir to learn measurement and tool away in Papa's workshop and tap our trees to see where the syrup on our pancakes comes from and so on....
Are my children allowed to decide to do whatever they like throughout the day? No. Do they have chores? Yes. Do they feed themselves whatever they like. No. Watch t.v.? No.
Frankly, the thought of such an unstructured, child led environment made me wonder where the parents were and brought back visions of Lord of the Flies. Barbies are not educational, folks. I hope that magazine gets a plethora of email and letters from parents as shocked as I.
Posted by Me at Wednesday, September 12, 2007

Sounds like you are doing in your home what very expensive Montessori academies try to recreate in a school setting. They are imitating home while others try to imitate public school. Ironic, heh?

Hello Hannah! Thank you for your comment on my blog. Where in Germany did you live or visit?
I'm looking forward to getting to know you a little through your blog :).

I'd be curious to know what magazine that was. That's crazy! Most unschoolers I know of don't even let their children watch tv or play with Barbie.

Nanny: How funny. I don't know much about Montessori schools but it is ironic.
Jeanine: We traveled throughout a lot of Germany this past Dec./Jan. We stayed in frankfurt, Nurnberg and Erfurt and took day trips from those cities. New Years Eve we spent in a little town at the foot of the Alps. It was absolutely wonderful. My husband speaks German well and me, not so good. I'm learning.
We absolutely love Germany and the German people and culture.
Joseph: It may have been a new magazine called "Experiance" but I'm not sure. I had picked up a few new ones to browse through and I could not believe what a bad taste it gave of unschooling. Crazy is right!

I just love your blog. Very thoughtful and inspirational. We homeschool too. We do use a waldorf inspired curriculum but I interpret it in a very relaxed way LOL!

i really need to quit hanging around all these homeschooling moms...it makes it ever more difficult to stay on shore instead of jumping into the river.

i was homeschooled in grade school...kudos to you.

i loved your profile- very intriguing. i'd like to learn more!

i don't want to click off of your page because i LOVE the music playing...to darn bad it shuts off each time i click in here to comment.