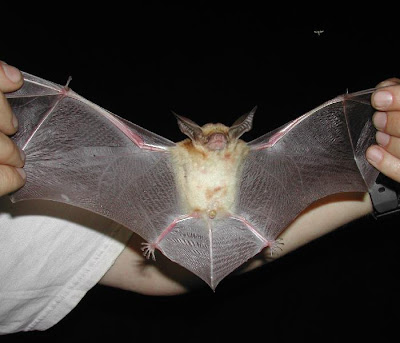 I am morbidly afraid of bats.

I hate them and abhor them. I do realize they eat the mosquito's and black flies, but I'd rather be bitten by a mosquito than see a bat. It all stems from living in a ancient Victorian house infested by them. I just thought I'd preface this little story with this explanation.
Annaliese and Andrew decided to give our dog Bear a bath. She really needs one as she smells like a ... dog. Upstairs we all went and I begin to show them how we bathe her. The kids are five and six years old and I think they can do it by themselves now.
As I reached to pull the shower curtain closed with bear in the tub, out of the corner of my eye (you know where this is headed, don't you?) I see something black fly out of the cream colored shower curtain and straight into my hair. I kid you not. Seriously, I would not kid about bats.
I screamed and ran, leaving three kids and a dog to their own defenses. I reeeaaaallly screamed. Sean thought I must have dropped Ella down the stairs. As I ran, I felt something fuzzy go squish under my bare foot. It's true.
The dog disappeared, the older two kids ran into the boys room and slammed the door and I realized Ella was still in there (I still screaming for Sean) with the BAT.
Sean went in after her as I was incapacitate and found the bat lying dead at her feet. I had killed it when I stepped on it, turning to run. Ewwww.... gross.
The moral of the story, if there is one to be found, is please don't leave me in a cave with bats and small children. I am of no rescuing use to them.
Sean spent the next ten minutes undoing the damage I'd done to the children's small brains with my screaming, showing them the dead bat and letting them touch it's outstretched wing. I stood in the background holding Ella and apologizing for abandoning her to the bat with tears rolling down my cheeks, somewhere between laughing and "oh, my God, thank God it's dead! How disgusting!"
Just another peaceful afternoon in our home. :)
Posted by Me at Saturday, August 25, 2007

Oh my! I am between wide eyed terror just thinking this could happen and rolling on the floor laughing because I'm sure I would lose all my senses too if a bat flew into my hair! Bats and large spiders... EEEWWWW!!!

I once abandoned my toddler aged brother while fleeing from a small dog. I was about 7 at the time, but I have never stopped feeling guilty for letting the dog jump all over him while I watched from the top of a swing set. Somehow, I still feel so guilty for it :( (I've really got to let that go!)

Hmmm... I don't know which is worse, black widows or bats!

Balck widows stay grounded, right?? or do they jump? I'd prefer neither.
Thank your for the sympathies, aldies. Yes, I feel like a terrible mother...

Hannah,
I wish you could have been at my house this morning when the 5 women read your post! We laughed, cried, and screamed. What woman would not sympathize with your plight! Hope today is a nice, calm day.

Thanks, Cindy! I've heard this story has brought a lot of the same responses, which is comforting.