The Value of the Older Generation Part 2

It so happened that two sisters married two brothers. One brother died, leaving his wife with six children to care for during the depression years. The other sister died, leaving her widowed husband with two remaining children. Three other children had already passed away. And so the surviving brother and sister in law married, combining their families and building a new one. This remaining couple became Nan's parents. Nan was born when her father was 52 years old. Nan is Sean's Grandma. Sean is my husband. 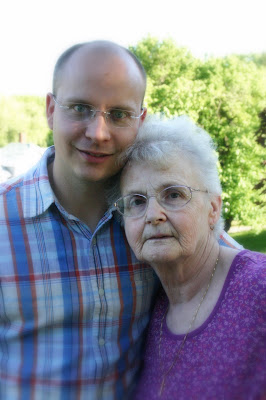 When Nan was growing up her family did not have indoor plumbing. Instead there was an outhouse with several seats to accommodate the large family. Nan loved going to school where there were toilets and running water!
Two of her older half brothers were already away in the service and so she did not know them or see them much.
When the family's shoes became worn, they would take cardboard tracing of their feet and slide those cut outs into their shoes.


At age seven she was expected to cook for the family and laughingly remembers making pasta for the first time. She put the pot of water on and dropped the pasta in, watching it all turn to paste. She didn't know that you had to boil the water first.


Nan married when she was 15. It was a troubled young marriage, shaky at best. Nan had nine children, one right after the other. She once told me that when she went into labor with the first child and went to the hospital, she was expecting them to open up her belly and take the baby out. She had no idea how babies were born!


Her parents helped her out with groceries and caring for the children. It is no wonder that she had her first stroke when she was just 19. She worked in a factory earning $3 an hour because she had to, at the same time caring for her seriously ill sister and 80 year old father. Her father was a good man and had helped her a lot over the years. Now she took care of him as another child.
Nan shakes her head in disbelief, hearing of a recent divorce. "People don't take their vows seriously anymore." Nan and Chris are still married fifty plus years later. It is a marriage that has endured a lot of the "for worses" and "in sickness" that Nan and Chris pledged in the parish many decades ago.


Nan has the biggest heart of any woman I know. She is great at cooking all-American food. Her pasta salad, potato salad, and hot sauce recipes are the best! My husband grew up eating her oatmeal cookies and loving them. One of the first things I did after we were married was ask her for her secret recipe. After all, I had heard about these cookies non-stop. Nan starting laughing out loud and couldn't stop, reaching into the cupboard to pull out a canister of Quaker oatmeal and point to the recipe on the back. We still joke about making Sean cookies from her "secret" recipe! They are delicious!


My husband spent much of his time growing up at his grandparents. His mother was the only girl out of Nan and Chris's nine children. When he was a baby, Nan emptied out a dresser drawer and made up a bed for him in it. Sean credits much of his good upbringing to his grandmother. 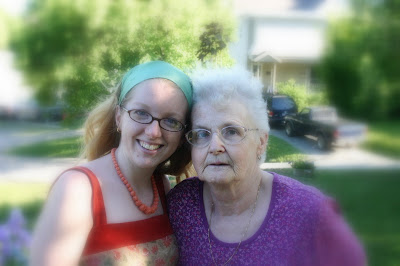 Grandma and Grandpa live about an hour away, in the little town where Sean grew up. Even though their five room house is small, they welcome us warmly and happily. There is always extra food and cool iced tea waiting in the fridge. Grandma and I have spent countless hours at the kitchen table, peeling apples for apple crisp, sharing stories, or tending to a child. It was at her kitchen table that she patiently taught me how to crochet eight years ago.


Whether she realizes it or not, Nan is a Titus 2 woman in my life. She has shared wisdom in parenting, keeping home, cooking, marriage, hospitality and many more lessons on life. She lives out her simple Christian faith in her daily life and I love her for that.
Posted by Me at Monday, June 18, 2007

What a beautiful example of the older woman teaching the not quite so old woman. I'm surprised that you consider yourself old tho... I still don't.

What do I mean?? The word woman used in Titus 2 is the word "presbutis" meaning "old woman" and is derived from the word "elderly".

That same word presbutis or "old woman" is used to describe the old lady and the young lady. This is in contrast to the word Paul uses elsewhere such as in "Woman keep silent" and other verses where he uses a word for "woman" meaning simply a woman or spec a wife.

So basically Paul is saying that the old, old ladies should teach the newly (the word young means new and youthful)- the newly old ladies how to behave.

Some Bible teachers believe this is due to the problem of gossip that was prevelent in Titus' church (see context of the rest of the book). I still think it's within the realm of accurate interpretation to say the older should teach the younger. Paul probably used the words "older old lady" and "younger old lady" (to paraphrase) due to a specific situation he was addressing.

Anyway, just an interesting tidbit of info which I thought you would enjoy. I found it very interesting...

I don't consider myself old. I'm younger than you and always will be! :)